On my last morning in California, I was walking around Altadena in the company of my sister-in-law and her adorable little terrier mix Jack, admiring the flora and getting it all wrong. She and Jack were being lovely and patient about it.

“No, actually that’s lantana,” my sister-in-law said. (Well, it did look like this variety of cosmos, a little bit. And a few yards later, someone was actually growing some. So there.) 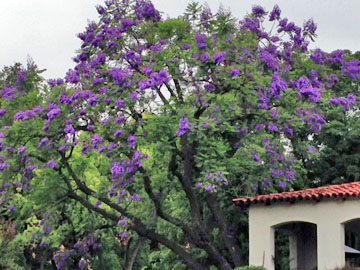 At least I knew a boat when I saw one. 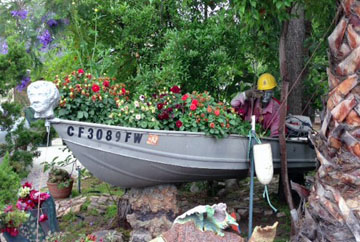 Funny thing about Southern California, though: For all the hard-to-identify plants and ruthlessly speedy drivers, it has a way of making you feel at home very quickly. As my oldest kid said once on a previous visit, staring up at the starry night sky over the mountains: “I think I see what this California thing is all about.”

As I mentioned, I had never been to the Southern California Genealogical Society’s remarkable Jamboree before this year. Yet it felt like I’d been there a dozen times before — everyone running around organizing things was just so nice. I will admit that I winced upon being issued a “First Timer” ribbon for my conference badge — what is this, Pledge Week? — but nobody made me do pushups or carry their backpacks or anything like that. They just kept things running smoothly and, despite what must have been a fiendish amount of work, smiled and laughed more than any East Coaster ignorant of local plant life had a right to expect.

So, despite my newbie status, I could relax and wander the exhibit hall … 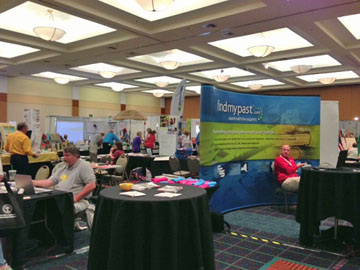 … and parachute in on any number of interesting presentations. Beyond the extremely worthwhile talks on methodology and sources, Jamboree offered some interesting glimpses of genealogy-related products and services. (Conferences in general are a relatively painless way to sample these, I must say.) A recurring theme in lectures and casual conversation was linking up genealogy to a generation raised on Twitter and Tumblr. I found some generalizations on this topic to be, well, generalizations. For instance, there seems to be a well-entrenched idea floating around out there that kids don’t read and write anymore, whereas to judge from my daughters’ experiences with Tumblr and online fiction-writing forums, the new age is giving them opportunities to express themselves in this department that I would have killed for, back in the day. 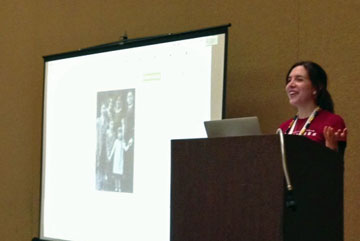 Then again, maybe that idea is floating around out there, too. I heard Tammy Hepps (above) of Treelines demonstrate a system of sharing family stories and pictures that seemed to be pulling in a lot of what I’ve noticed in the way my kids read and write and share online — visual interest and flexibility in how much and what you write being biggies. I have not yet actually tried Treelines myself, but I’m going to give it a whirl and report back.

Back on the learning and development front, I found Dr. James Ryan’s lectures on Irish sources very valuable. Saturday, he talked about land records in illuminating detail; Sunday, he frequently had us in stitches during his talk on “Strange And Unusual Sources for Irish Family History” (trust me, it can get strange, strange, strange). And Paula Stuart-Warren’s Sunday session on developing step-by-step research plans included hands-on, audience-participation examples that proved to me, once again, that I must never assume I am incapable of being surprised on the genealogy front. Also, it gave me lots to do on the flight back East as I scribbled notes for all the tweaks I am now making on what I once thought were comprehensive research plans.

Thanks for the memories, SCGS, and congratulations on your 50th-anniversary year. Hopefully I won’t be a stranger anymore. And I promise to take a better picture of the Hollywood sign next time. Honest. 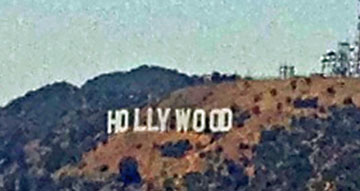 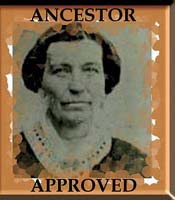